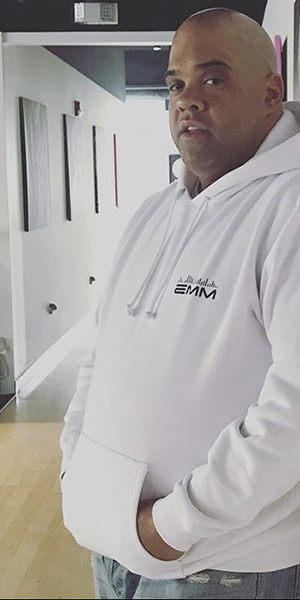 GStarr Entertainment’s CEO, Gabriel “Gaby” Acevedo, has shaped the experience of sounds adored worldwide since his teenaged street team promotions with the Bronxbased record pool, Buddha Inc. Coming from a family of educators, Acevedo was taught the difference between creating music for recognition and existing as a product of hiphop culture. For three decades, the RIAA-certified multi-platinum-selling mogul has exemplified the latter.

“My older brother was a DJ. He would bring his turntables to the fire escape, the lobby of our building, or scratch music throughout the neighborhood. When I got to high school, my brother and his friends started running a record pool out of our living room. I began helping with their marketing after school. We would put up artists’ stickers at retail stores. Our team also hung posters for forthcoming shows across the five boroughs,” he detailed.

Eager to make his mother proud, Acevedo momentarily enrolled in college to uphold the tradition of becoming an educator. By the completion of his first year as a teacher assistant, the global hitmaker knew entrepreneurship was where his heart remained. He dropped out of school and rejoined his brother handling rap artists’ branding and advertisements. Still, every leader endures their fair share of adversity. “We were one of the first crews to put promotional assets on the highway. We did our work overnight. People would question, ‘Who did Big Pun’s album?’ No one knew our faces, but that changed,” the trailblazer explained.

A Wall Street Journal headline accused Acevedo’s brother’s company of vandalizing the city after a group was arrested for hanging LP banners. Despite these events, the result was lucrative, as Buddah Inc. became a go-to source for New York-based music campaigns and more. The then rising magnate took his talents on tour. While at a camp, Acevedo met his mentor, Steve Rifkind.

Within two weeks of their introduction, Acevedo began handling some radio promotions for Rifkind’s Loud Records’ artists. In time, he was on the road overseeing national radio for the label’s complete roster. After a lengthy stretch of success, Rifkind sold the Loud. Other major labels began to scout Acevedo with C-suite position offers, but loyalty kept him close to his earliest adviser. “Steve told me, ‘I know a lot of people are calling you. It is okay. I am going to get back on my feet sooner than later.’ I told him, ‘I will stick it out with you,'” the executive clarified of his defining moment.

After a year of strategizing, the pair established SRC Records under Universal Music Group. Acevedo was both a partner at the company and its president. Among a 5-man force, new signees were launched to superstardom — including Akon with the platinum debut album, Trouble. Premiering hit single’s like “Lonely” and “Locked Up” proved Acevedo could spot and break talent.

“People immediately questioned if Akon was marketable in the mainstream. I was at home with a friend “Casper.” His uncle was the assistant warden at Rikers Island. I asked if Akon could perform for the inmates. The jail complex agreed but said, ‘We will not pay him.’ One of my business mantras is ‘Being humble helps you in life.’ So, our team ended up going to Rikers Island to perform for 4 shows,” Acevedo confirmed. Subsequently, people began calling NYC’s popular Hot 97 radio station with requests to hear “Locked Up.” Akon’s first plaque came amid the ascending musician’s state-to state correctional facility touring and the Styles P-assisted song remix. Following this critically acclaimed smash were others on David Banner’s Certified, Asher Roth’s Asleep In The Bread Aisle, and Melanie Fiona’s The MF Life. Even so, the Nuyorican Bronxite never lost sight of his community.

Beside SRC’s growing international acknowledgment arrived the bilingual wordsmithing of Puerto Rican rapper Tego Calderón and Acevedo’s The Underdog/El Subestimado management credit. Being groomed on a Spanglish-speaking block doubled the boss’ staying power, as Boricuas are the co-architects of hip-hop in its birthplace. Signing the Terror Squad collective ahead of their No.1 Hot 100 entry “Lean Back” further cemented the sentiment: “We from the Bronx, New York — shit happens.” Still, guidance for creatives from Acevedo’s stomping grounds did not stop at the talent who shared his identity.

The multihyphenate is responsible for launching French Montana into the general market. “There are no limits to goals. I helped him with his mixtape distribution, the Cocaine City DVDs, and securing his first major record deal. French Montana was in motion in the streets, but he needed structure. The rapper asked, ‘Can you manage me?’ At the time, I had so much on my plate. So, he started coming to my office every day until I did,” the chairman informed.

From then on, Acevedo began teaching the MC the ins and outs of the business. Montana’s hustle was evident. Soon, the leading bridge builder fostered a plan to get Montana to overtake NYC airwaves by way of a FunkMaster Flex co-sign. After navigating some industry politics, the radio heavyweight agreed to meet with and later DJed at Montana’s birthday party.

Chart-topping accolades in the music world pale in comparison to Acevedo’s most significant position of all: head of household. “I am a father, husband, and family man. I think that gives me a lot of power. They are my biggest support system. Also, I have a 14-year-old son dealing with autism. He is the most loving kid in the world. My boy is my superhero. It is rewarding to see him evolve,” he affectionately affirmed. “A lot of people in my position or in general feel embarrassed about having a child with special needs. I was never embarrassed. My household is everything! When I am home, I am godly. My daughter understands how family works. My wife is Boricua, too. She and I grew up in the same neighborhood. I have known her for thirty years. We are business partners,” Acevedo continued.