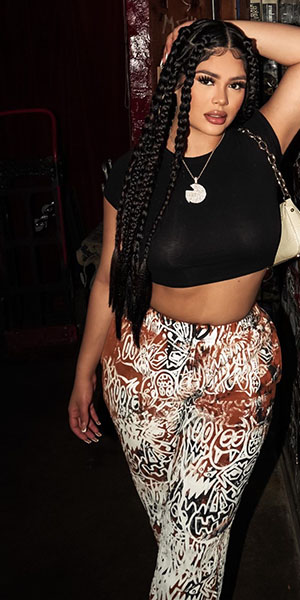 GStarr Entertainment’s first lady, DAISY SIMO, has spent the year sharpening her business acumen through the independent circuit with cross-genre bangers. The on-the-rise Mexican-American artist is a manifestation of her parent’s borderless dreams. Soon the world will know SIMO’s stomping grounds, the Coachella Valley, for much more than an annual music and arts festival — she is aiming to evolve into its lyrical heroine.

“Coming from an immigrant family, I understood the concept of responsibility early. I have always loved music because it was continuously playing in our household. That is the thing — you do not need a lot of money to enjoy music — but learning my craft will allow me to give back and provide with it,” the performer affirmed.

While her community brought diverse musical acts on tour stops, the starlet seldom saw talent which represented her identity on its stages. SIMO’s bilingual debut single, “Drip,” was invigorated by her paper chase and the desire to break free from a job as a bank teller. The muse’s synthy cash-grab bars were not solely aspirational but experiential. Her provided audio financial literacy strengthened SIMO’s capacity to go from counting others’ money to songwriting her way toward substantial deposits

“A friend involved in music thought I had a nice tone when I spoke. He questioned if I ever attempted to record music, but I had not. After our conversation, I told myself, ‘I will just try to freestyle and see what happens.’ I began posting my raps on Instagram. There are no Latina MCs in the Coachella Valley, but my videos began buzzing online,” SIMO detailed.

Through the influx of social media followers came one supporter that changed the course of SIMO’s musical journey: Gaby Acevedo. The New York-based GStarr CEO and rap management veteran (Credit: French Montana) swiftly acknowledged SIMO’s potential and began showing her the ropes of the industry. Acevedo’s gift for breaking hip-hop talent assisted with the poetess’ commencing verses on “Wavy” and her premiering 349K music video viewers.

The pictorial emergence of SIMO’s alter ego La Daisy showcased her as charismatic and curvy, veering away from perpetual slim-framed pop culture beauty standards. Through a Spanglish follow-up track, “Peek-A-Boo,” GStarr’s latest signee’s stiletto-strutting confidence was glamorously relatable for the listeners from around the way. Still, SIMO’s bass-heavy earworm, “Demand,” affirmed to 174K YouTube supporters that the MC was not just easy on the eyes — she had flow.

“I want my videos to be cinematic and timeless. For example, I was very inspired by Rihanna’s “Bitch Better Have My Money” music video. In the last scene of my “Demand” visual, I smoked a cigar, similar to her inhales,” detailed SIMO. The rapper’s attention to detail goes beyond creating vision boards ahead of each of her releases. La Daisy is a one-stop-shop who studies the greats.

A few of the newcomer’s idols include Missy Elliott, 50 Cent, José José, Nicki Minaj, Michael Jackson, and Beyoncé. On the heels of these legends are others like Selena, Gwen Stefani, Celia Cruz, Amy Winehouse and Doja Cat, helping SIMO reimagine her wardrobe ahead of camera close-ups. In this fashion, trap loops ensued on the bop, “Water,” mirroring the optics of some of her favorite MCs’ such as Future, Young Thug, and Playboi Carti.

“I am versatile because of my life experiences. If I catch a vibe, I may want to rap or sing. Look at someone like Cardi B — she records in two languages. Latinx superstars created lanes for me to record songs like ‘Wine,'” the wordsmith referenced. The mentioned Caribbean-infused riddim is rooted in SIMO’s fanship of the reggae genre and was produced by Infamy. Its audiovisual accumulated over 333K hits before La Daisy’s largest streaming service platform success, “Lenses,” dropped, garnering 434K Spotify listeners.

These tuneful accomplishments earned her set time on The Young And Restless Tour alongside J.I the Prince of N.Y, and Apollo Rai. Near her GStarr roster mates, SIMO built up her stage presence and gained fans on the road. “I don’t take any of this for granted. More than business, I cherish the Acevedo family. I want to make them proud for having confidence in my abilities. My loved ones came to America by crossing the border. There was a period they could not afford to keep my sister and I stateside. My parents sent us to Mexico to be with my grandmother while saving money. I remember us living in a garage — now I am booking shows with GStarr Entertainment,” the versifier affirmed.

A humble beginning and traveling for studio sessions motivated her D.O.C-produced single “Bicoastal,” which amplified 399K supporters online. Keeping in mind the audience that propelled her into the spotlight, SIMO made sure the subsequent offering, “Backend,” was caption-friendly, verifying: “I’mma need the front and the backend.” Devotees can attest to the pandemic placing constraints on how the world interacts romantically. So, the self-starter shot a quarantine-style video of her singing — on the melody of “Greedy” from her iPhone — winning over 274K onlookers.

GStarr brought her talents to New York, where new enthusiasts likened SIMO’s appearance to a Bratz doll. “NYC is compelling fashion-wise. Every day women are fly there. Manhattan’s energy is different from Palms Springs. That level of diversity was only introduced to me by my uncle and his record collection. He is a gay man who adores clothing and listens to a little of everything. He put me on to Madonna hits and vintage style. My uncle’s mark on my life confined more of a city boy feel than Jalisco, Mexico,” SIMO linked to her latest viral looks.

Beauty is power. The luminary tapped into that sentiment for her most recent sex-positive composition, “Bratz.” Equipped with a coke bottle shape, the videotape cartoon illustration of La Daisy was persuasive. All creative aspects are carefully planned with her older sister, Jasmine, a rising social media magnate.

Resilience is a pillar that SIMO secured from her kin. “Today, with cell phone technology, there is no excuse why people cannot do what they want in life. I aspire for other people to see me and feel like, ‘She is making it. I can achieve what I put my mind to.’ If you are not comfortable in a situation, changing your environment is more than possible,” the multi-hyphenate asserted.

DAISY SIMO’s preceding tests geared her work ethic toward a better future, and she is optimistic about what is to come. In 2022, it is all gas, no breaks. The luminary is in the studio prepping for her project’s reveal, soon-to-be-announced tour dates, and a growing intercontinental fanbase under GStarr Entertainment.