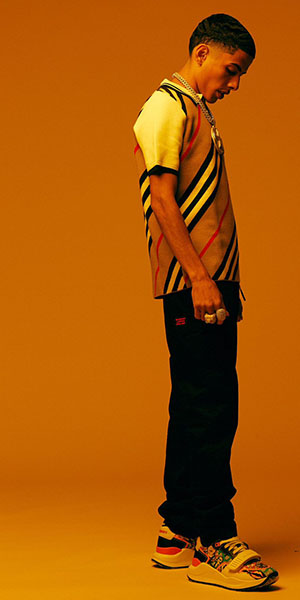 At 19 years old, Brooklyn artist, J.I. has heard the cliche that all rappers want to be in the NBA and vice versa. While he’s firmly cemented as an ascendent rap star, with no interest in hitting the hardwood anytime soon, he’s taken strategies from GOATs in the basketball world to help plot his next moves. “ If you ever watch interviews with the best athletes―Kobe, MJ, Tyson―they talk about getting shots up in the middle of the night, hitting the heavy bag after a grueling session. That’s the type of mentality I have. I’m obsessed with being great,” J.I. explains, which illuminates how a young star who has already taken over the rap game continues to get better, continues to strengthen his best skills.

After the young MC who was born just 12 days after September 11th emerged seemingly fully-formed with Hood Life Krisis Vol. 1 in 2019, the comparisons began to pour in. He sounded like Drake raised on Reggaeton, like Myke Towers born in Brooklyn. After the success of his first project he continued to share stories under the HLK umbrella and each found great success. His hit certified Platinum track “Need Me” has over 325 million streams globally and over 111 views. The track was also listed as one of the “Best Songs of 2020” by the New York Times. Hood Life Krisis Vol. 2 features “Love Scars” which now has over 70 million streams and on Hood Life Krisis Vol. 3 he teamed up with fellow New York rapper, A Boogie Wit Da Hoodie to create a fan favorite. All three mixtapes went on to land on Billboard’s Heatseekers chart and garner recognition from XXL, Genius, Billboard, and more. In between releases of HLK, J.I. also shared his label-debut EP, Welcome To GStarr Vol. 1 via G*Starr Ent./Geffen Records, which featured collaborations with Lil Durk and Nav, and Latin artist, Myke Towers. The EP received major support from Spotify who chose him to be the second artist on their RADAR program (helping share the stories of new emerging global artists with their users) as well as received praise from Vulture, Billboard, Complex, XXL, ABC News, Pitchfork and more. Today, his music has won over artists such as Jadakiss, Cardi B, and Drake, who sang along to his track “Used To” on Instagram Live.

Despite the reference artists being flattering, it pushed J.I. to move further into his own bag, to discover the type of music he had fun making, instead of the music he expected his fans to like. His new songs, as a result, are both instantly familiar and thrillingly unique. “I’m different. I came out the gate getting compared to other artists, but I feel like I’ve proved my worth, the reason why I’m here,” J.I. explains. “I’m still trying to prove it, but at this current moment, I need to stand out. I have fun doing it. For a while, I forgot that it’s supposed to be fun. I’m not here to compete for titles. I’m here to make music and give people great quality music.”

In any other industry, putting yourself first is an act of selfishness, but in the rap game, it’s allowed J.I. to establish himself as a totally individual artist. He’s fueled by a desire to explore new genres and fuse them to his unique blend of Latin-inspired rap. With new music on the horizon, J.I. will continue bringing his music to the national stages across North America with a headline tour, though the anxiety has dissipated after the resound success of his Rolling Loud set. “The nerves are gone because I did Rolling Loud,” he says. “That’s like the new Apollo. If you can make it there, you can make it anywhere.”

J.I. has certainly made it, but anyone that knows him understands that his definition of making it is constantly evolving. He’s never satisfied―always hungry―which makes him both a rising star and a good bet for the long run. He’s proud of what he’s done, but the music around the corner has him eager to drop his next great project. “It’s dope, because I’ll play old records which I thought were so hot when I recorded them. They’re still good, but I’m excited for what’s next,” he explained. “What I’m doing now is just on another level.”